First Meeting of WHAMglobal Board of Trustees Spans the Globe 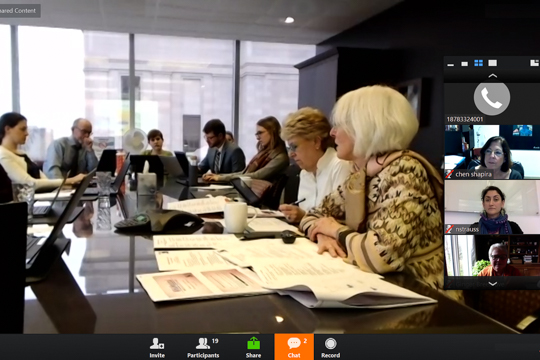 The first WHAMglobal Board meeting, as seen on the webinar. The images at right show Chen Shapira linking in from Israel, Nan Strauss from New York, and Ginger Breedlove from Kansas.

The first Board of Trustees meeting of WHAMglobal (Women's Health Activist Movement Global), held as a webinar from the JHF office on the afternoon of March 13, was a worldwide affair. Nadene Alhadeff logged in from Australia — local time, 5 a.m. — with strong coffee at hand. In Israel, Chen Shapira, MD, pushed back her bedtime to join in. Christine Morton, PhD, was in California; Usha Raj, MD, in Chicago; Fleur Sack, MD, in Florida; Betsy McNamara in New Hampshire. Margje Haverkamp, MD, a Dutch researcher, called from her New York City office.

All 20 Trustees have a common purpose: to inspire regional, national, and international advocacy and action to advance women's health, safety and quality.

Debra Caplan, MPA, vice chair of the JHF Board of Trustees, was named chair of the WHAMglobal Board. Ginger Breedlove, PhD, CNM, APRM, FACNM, will serve as secretary and treasurer. JHF CEO Karen Wolk Feinstein is co-founder of the organization and its president. WHAMglobal became a supporting organization of JHF in 2017.

Setting the scene, Dr. Feinstein described WHAMglobal's mission to form networks of advocates and experts, with maternal health as the first focus. In May 2018, WHAMglobal took a Maternal Health Study Tour to Australia that was a revelation. "There, every birth is a significant event that needs both clinical and behavioral support from preconception through postpartum," she said. "The Australian approach to pregnancy is comprehensive — the care does not end for the women, the family and the child until they are bonded successfully." She and other WHAMglobal members returned with a determination to improve the U.S. system.

"Women's networks are powerful. It's time to move beyond marching and get real change in women's health status," Dr. Feinstein remarked. WHAMglobal will be building those networks in April at the International Women's Forum in Barcelona, hosting a breakfast for more than 100 women who are leaders in health care.

Kate Dickerson, MSc, women's health specialist for WHAMglobal, gave our vision for "Pittsburgh: A Safer Childbirth City" and the baseline of creating a complementary community-based initiative, including workforce development and training (a midwife champion program, doula certification) and a Mothers Supporting Mothers volunteer program. She previewed the June 9 event "Birthing a Movement: Taking Back Motherhood," our regional response to the national March for Moms.

Guest speaker Ryan Adcock, MPA, executive director of Cradle Cincinnati, joined in to provide an example of best practices at work. He gave an overview of Cradle Cincinnati's innovative model in reducing infant mortality. Adcock was among the speakers at WHAMGlobal's Maternal Health Leaders Symposium in Pittsburgh on Oct. 8, 2018.