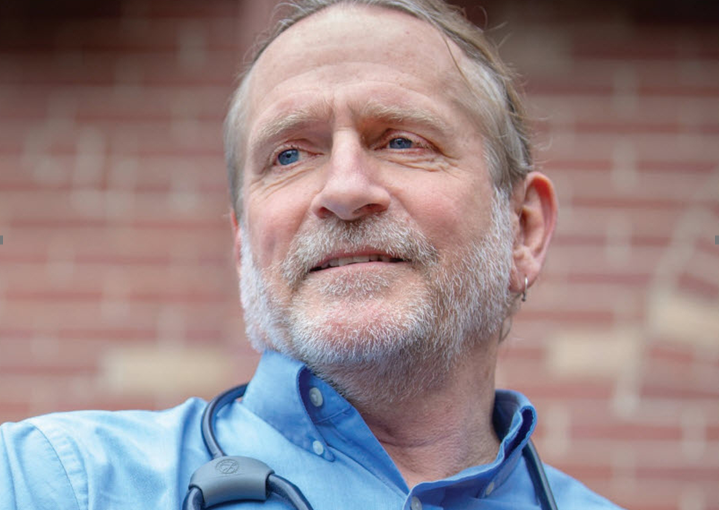 Everyone deserves access to compassionate health care, and few know this as well as Stuart Fisk, CRNP. His life's work has been dedicated to HIV activism, research, prevention, and care for persons living with HIV disease.

Fisk's work on HIV and with excluded populations began in the 1990s in the Tenderloin District of San Francisco where he and a team of nurses cared for the forgotten victims of the AIDS epidemic.

Experiencing substance use disorder, mental health issues, undocumented immigration status, and other hurdles, his patients were unable to participate in research studies and didn't have access to basic health care or drugs available in trial studies.

A team of nurses from Visiting Nurses and Hospice of San Francisco moved their operations into one single-occupancy hotel that housed about 200 people using drugs actively and doing sex work. Fisk recalls the disgraceful conditions the group worked in trying to provide the most basic care like ensuring patients had clean sheets and didn't die alone.

"I really focused my work from 1992 to 1996 on that population of people, mostly providing hospice services to them. I learned about sex and drugs from my patients in a very real, very human, and often very touching way," Fisk said. "Really deeply understanding the sexual lives of people and how it is connected to their personal needs, their financial needs, their political needs. And the same with drug use."

Fisk became their healthcare connection. As he continues to bring health care to marginalized populations in Pittsburgh, he carries those faces and places with him.

Fisk has earned a Bachelor of Arts degree in anthropology from West Virginia University and a Master of Science in nursing from San Francisco State University. He has a certificate for CRNP Adult Medicine from the University of Pittsburgh and is certified by the Association of Nurses in AIDS Care.

"I had more personal connections to the epidemic in terms of friends, both living with and dying from AIDS, and I have more of an activist interest in public health," Fisk said. "I thought about going to medical school for about 15 to 20 minutes and then decided to go to nursing school and never looked back."

In 2015, when AIDS Free Pittsburgh was founded, Fisk was at the table, knowing well that AIDS needed to be addressed. The disease has been detectable for the past 30 years and able to be treated for 20 years, yet cases continued to rise because it is glossed over in differential diagnosis due to the stigma associated with it.

He lauded AIDS Free Pittsburgh's work to break through the barriers surrounding HIV/AIDS but remains discouraged by the lack of testing in healthcare systems and the patients who end up in late stages of the disease due to lack of diagnosis.

"We order more MRIs than we do HIV tests, and HIV tests cost a couple of bucks at this point. It's an unwillingness for healthcare providers to see the problem because it's not like they see HIV every day. Providers in general are afraid to talk to their patients about sex and drugs in an open, honest, nonjudgmental way where they're not the expert."

At that time, AIDS Free Pittsburgh was taking shape, so was the Center for Inclusion and Health at Allegheny Health Network.

Focusing on excluded and complex populations who sit on the margins of the healthcare system, Fisk began to create innovative programs, evaluate them, and to then propose them to the healthcare system as ways to revolutionize the way health care is perceived and received.

"I fundamentally do not believe that the way we've structured health care in our country is correct, ethical, or sustainable in the long term," Fisk said. "This isn't charity work. It's solving the problems of the health system."

As Director of Strategy at the Center, he became the first nurse practitioner to sit at the level of a physician division director. A non-traditional leader, he leads at the bedside, in street outreach programs, in the community at large, at the board level, and in the clinic.

He is the former principal investigator for the Ryan White Grant, Positive Health Clinic. JHF has funded his work supporting the establishment of doula programs in refugee communities and its work with exchange sex workers. He has worked with Prevention Point Pittsburgh, one of only two legal syringe services programs in Pennsylvania, since 1996 as a volunteer, naloxone prescriber and board member, with JHF being one of the first funders of its needle exchange.

"We knew that if we could create systems for the most excluded and complex populations in our community then everyone would benefit. When you take the most complex, excluded, difficult patients and put them in the waiting room everyone gets better care. The providers have to be better, more patient, better trained. They have to be kinder. Everyone benefits from that," Fisk said. "I think our work has been a catalyst to changing the way people think about health care in the community."