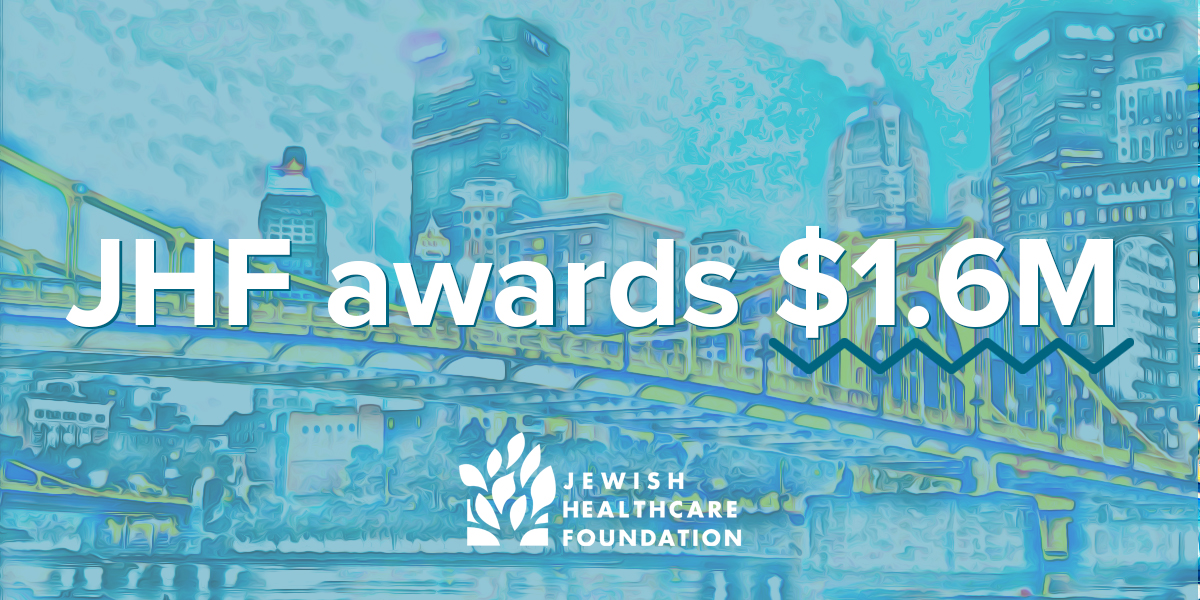 The Jewish Healthcare Foundation (JHF) on December 6 approved new grants to begin the journey for Pittsburgh to become a national center for autonomous patient safety solutions and to support bringing a music and education program with a message of unity and healing from racial and ethnic violence to Pittsburgh.

Establishing Pittsburgh as a Leader in Autonomous Patient Safety Solutions

JHF approved a two-year, $500,000 grant to the Pittsburgh Regional Health Initiative (PRHI) to support a healthcare safety and technology project that will advance the Pittsburgh region to emerge as a hub of autonomous patient safety solutions and to build on the region's assets in artificial intelligence (AI), machine learning (ML), advanced informatics, big data, predictive analytics, and life sciences innovation.

The effort to establish a center for innovation in patient safety within the Pittsburgh region—a region strong in tech innovation, healthcare expertise, and advanced transportation, space travel and manufacturing autonomous safety discoveries—reflects JHF's decades of work in healthcare safety. This project will attempt to connect local partners in Pittsburgh with each other and, when appropriate, with national patient safety experts to explore how autonomous technologies, such as AI, ML, big data analytics, and robotics, can improve our understanding of the preconditions for medical errors and our discovery of fail-safe solutions. The Pittsburgh region aspires to be a national center for autonomous solutions; why not patient safety solutions?

"The time is right for this investment to move Pittsburgh's growing resources and talent in autonomous technology to transform patient safety," said Ronald Poropatich, MD, director of the Center for Military Medicine Research at the University of Pittsburgh and PRHI Board member. "Many of us in Pittsburgh are working at the cross-section of health and technology, and this funding will help to create the strategy and academic/medical/industry partnerships to make the region a global leader in patient safety."

"JHF has spent decades activating our community to address medical error, and this new phase of the work could generate promising collaborations among our universities and private tech companies," said Audrey Russo, president & chief executive officer of the Pittsburgh Technology Council, and JHF Board member.

This grant will provide funding from January 2022 to June 2024 to support development of a regional Autonomous Patient Safety Blueprint to document our regional resources; seed funding for the most promising breakthrough product and technology ideas in autonomous patient safety; support for regional conferences focused on AI and health care; and development of a prototype to adapt hospital and health-system command centers to anticipate and prevent medical errors.

"We envision Pittsburgh as a global leader in autonomous patient safety, building on our edge in eds, meds, and technology," said Karen Wolk Feinstein, president and CEO of the Jewish Healthcare Foundation. "This is long overdue. Healthcare safety technology is at the cottage stage; we're aiming now for a moonshot, and it should come from Pittsburgh."

JHF approved a two-year, $50,000 grant to bring Violins of Hope, an arts and education program that celebrates humanity's ability to rebound from depravity and hate to Pittsburgh for a six-week period starting in mid-October 2023.

The Eradicate Hate Global Summit held in Pittsburgh this fall forced an acknowledgement of the clear and present danger of Americans consumed by hate. The Greater Pittsburgh area has already experienced several hate-based attacks, the most significant of which resulted in the murder of eleven Pittsburghers at the Tree of Life on October 27, 2018. The Jewish community lives in a state of heightened anxiety, knowing the potential of what these irrational, toxic animosities can create. Violins of Hope is an effort to bring healing to the region through the power of music and the human spirit.

The centerpiece of Violins of Hope is a collection of more than 85 restored violins, violas, and cellos played by Jewish musicians during the Nazi regime. The efforts to bring Violins of Hope to Pittsburgh began in 2018 under the leadership of project chair Sandy Rosen and co-chairs Linda Simon and Pat Siger. These instruments have survived concentration camps, pogroms, and many long journeys to tell remarkable stories of injustice, suffering, resilience, and survival. Each instrument has a unique and inspiring story that connects listeners to the history of the Holocaust in a deeply emotional way.

The Jewish Federation of Greater Pittsburgh is coordinating the Violins of Hope exhibit in Pittsburgh, and it will be the centerpiece of a six-week landmark community-wide collaborative fighting antisemitism, racial bigotry and intolerance through arts and education. The project has already secured commitments from more than 35 non-profit arts groups, religious institutions, and other community agencies to be partners in this initiative by providing unique programs related to the Violins of Hope mission. The exhibit will be housed at the University Art Gallery at the University of Pittsburgh, with related exhibits at the Holocaust Center of Pittsburgh in conjunction with Chatham University. Violins of Hope will be a landmark collaboration of non-profit groups, religious institutions, community organizations, and musicians.

JHF is contributing $50,000 in funding to be released in two payments, one each in 2022 and 2023. This commitment is part of the $1 million total budget for the project and intended to aid the Violins of Hope Committee with their additional fundraising efforts.

JHF approved a one-year, $50,000 emergency grant to the Pittsburgh Jewish Chronicle to provide coverage of issues of interest to the Jewish community of southwestern Pennsylvania. The award-winning newspaper is an important voice in the community, and it has played a vital role in connecting and strengthening the Jewish community in Pittsburgh.

• A two-year, $50,000 grant to PublicSource to provide independent coverage of healthcare issues of interest to the residents of southwestern Pennsylvania.