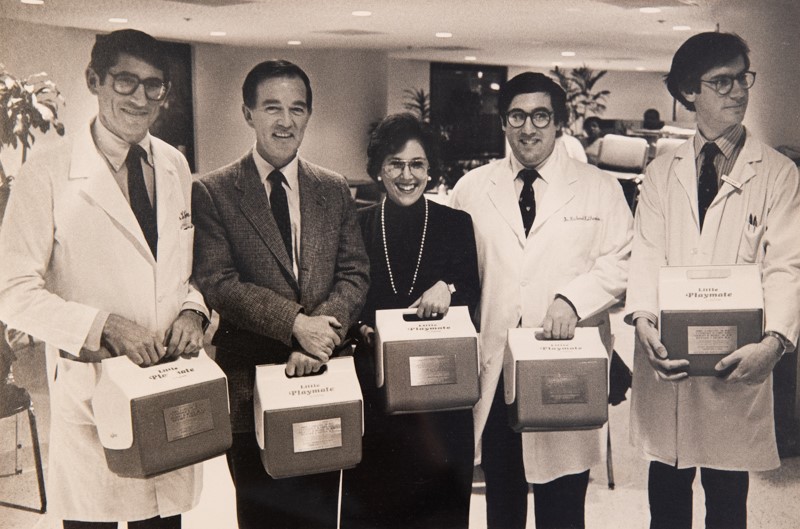 Debra L. Caplan with the Brigham and Women’s physician team that performed the first heart transplant in New England.

Debra L. Caplan has never shied away from a challenge. Throughout her working life, she has jumped enthusiastically into new situations, putting in long days and nights, and learning by doing. The reward has been a fulfilling career studded with healthcare firsts.

Fresh from Mount Holyoke College with a bachelor's degree in Sociology, Caplan joined the Massachusetts Department of Public Health. Modern emergency medicine was just coming into its own, and she helped to create the state's first emergency medical system – creating policy and protocols, and establishing training programs for emergency medical technicians and paramedics. Launching the state's first poison control program and a statewide trauma system was next. After serving in a leadership role at the state Office of Emergency Medical Services for five years, she went on to join the storied Brigham and Women's Hospital, a Harvard Medical School Teaching Hospital. There, as a young vice president with an array of operational responsibilities, she developed the program that performed the first heart transplant in New England.

A native of Squirrel Hill, Caplan returned to Pittsburgh with a master's degree in Public Administration from Harvard's Kennedy School. She joined Allegheny General Hospital as a vice president and had oversight of many operational departments, academic programs, and strategic and community development initiatives. 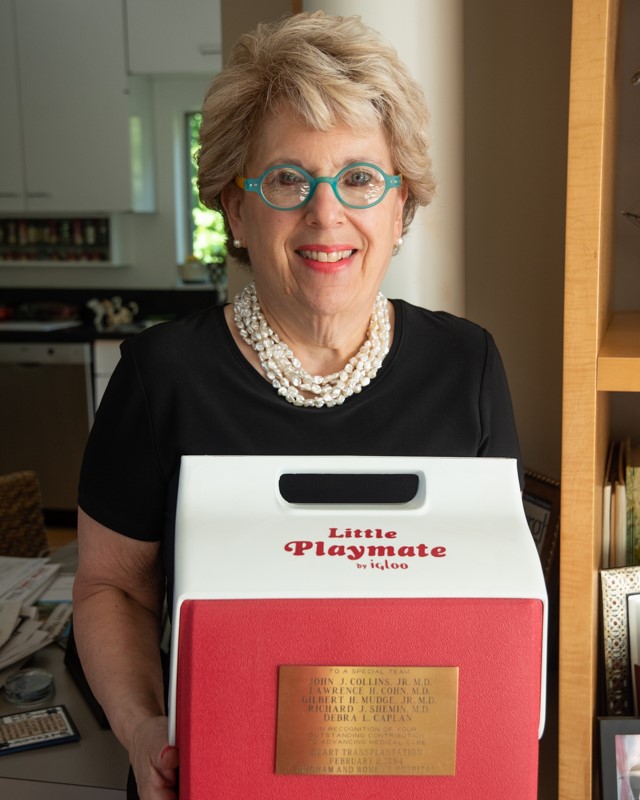 Today at home in Pittsburgh.

I was part of the senior leadership team that led the parent organization of Allegheny General Hospital out of bankruptcy and into the merger with West Penn Hospital. [Rapid expansion in the mid-1990s had built AHERF (Allegheny Health, Education, and Research Foundation) to 30,000 employees across the state in two medical schools and 14 hospitals. Its 1998 bond default was at that time the largest nonprofit insolvency in U.S. history.]

No other hospital system had been through a bankruptcy. There was no guidebook. We were all learning as we went along, breaking new ground. It was challenging, rewarding – and the most stressful time of my life. But we kept 5,000 jobs, a talented medical staff, and maintained patient quality and satisfaction. We were able to re-position a huge healthcare system for success.

What was especially rewarding about it?

Allegheny General always had a reputation for serving the community, and I oversaw a team dedicated to growing that relationship. The AGH Northside Partnership was created so that we could work side- by-side with the community on issues like jobs, housing, business development, food security, and health. It was, and continues to be, one of the most wide-ranging partnerships of its kind between a hospital and a community. Today there is a lot of talk about "population health." We were doing that 25 years ago.

What makes your contributions to JHF unique among its board members?

What I think is unique is my experience and knowledge of health care as an administrator, a community activist, and through my personal family involvement with Montefiore Hospital [the sale of which led in 1990 to JHF's creation]. In the late 1940s through the early 1950s, my mother, Minnie Caplan, was the director of Montefiore's outpatient department. She was an officer of the hospital auxiliary (also known as the Ladies Hospital Aid Society), as was my aunt, Gertrude Caplan. My uncle, Paul Caplan, was a senior physician at Montefiore. As a teenager, I worked there as a patient escort during the summers. And my father, Joseph Caplan, worked at Blue Cross Blue Shield as a hospital management engineer. I didn't want to be a physician, but I knew I'd be involved with health care. It's in my blood. Serving on the board of JHF is perfect; my life has come full circle.

What do you enjoy most about serving on JHF's board?

Overall the Foundation tackles significant issues, and that's a credit to Karen [Wolk Feinstein, JHF's CEO]. It's through her vision and leadership that JHF has been on the cutting edge of policy, advocacy, and reform. She is always pushing the boundaries to effect change. JHF is truly a force.

I am excited about WHAMglobal [the Women's Health Activist Movement Global, of which Caplan became chair in April]. It was started in 2016 to build networks of experts and advocates so that we can improve delivery and outcomes, equity, and leadership for women in health care. We're working to support mothers and families throughout the entirety of their care; to raise awareness about the unacceptably high rate of maternal mortality in this country; and to help expand enrollment by Pennsylvania families in the federal WIC supplemental nutrition program. It's incredibly important work. WHAM truly is a global, activist board and there are outstanding, strong women from across many related fields who are deeply involved and love being part of it.

What other work have you been doing since retiring from the Allegheny Health Network in 2015?

Along with operating HobartHumphrey, a small healthcare consulting practice, I'm part of The Forbes Funds' Executive-in-Residence program, advising nonprofit leaders. Basically, at any time I'll have two or three individuals -- generally executive directors or board chairs – to whom I provide support and coaching. We engage in generative discussions: they get to bounce ideas off me, and develop greater knowledge and confidence in their decision-making.

I've gone from managing large operations and large staffs to coaching people one-on-one, from being a doer to being an advisor. It's taken a little bit of adjustment, but it's good to reinvent yourself from time to time. It's been very satisfying.

What advice would you give women in the workforce?

Be a risk taker. Obviously, you need to prepare yourself for the challenge at hand. Focus on your job and doing the best you can. But don't be afraid to push yourself. Take the most senior job you can -- even if you don't feel 100 percent ready. Don't be afraid to change jobs if that will move you up to the next level. You have to be opportunistic in a positive sense, to try to reach the highest level you can, because that's where you can make the biggest impact.

End of year JHF board meeting

JHF Board Convenes for August 2021