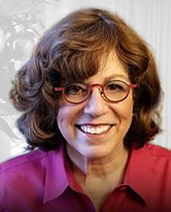 PITTSBURGH, April 18 — Nina Butler, EdD, an educator with extensive experience in the nonprofit world, has been named by the Jewish Healthcare Foundation (JHF) as their Project Coordinator for its contribution to the 15217 Neighborhood-based Teen Mental Health Initiative. The initiative is a collaboration among JHF, the Jewish Community Center, Jewish Federation of Greater Pittsburgh, and Jewish Family and Community Services. Dr. Butler will start officially on May 1.

"Nina Butler is uniquely qualified to lead this initiative. She brings a wealth of professional experience, working directly with young people and on health and mental health issues," said JHF President and CEO Karen Wolk Feinstein, PhD. "She will help us realize our vision of a neighborhood safety net for teens, building from the bottom up."

Dr. Butler most recently served as Pittsburgh coordinator of Legacy Heritage OnBoard, a leadership development program for promising board members of Jewish organizations. As an independent consultant, she has provided strategic guidance to school boards and professional leadership, such as developing online projects for teens at risk and consulting to the United Way and UPMC Children's Hospital. In 2014, with a grant from the Jewish Healthcare Foundation, she developed a curriculum for genetic health and immunization for Pittsburgh's Jewish day schools. As a volunteer, she runs Bikur Cholim of Pittsburgh, which provides resources for Jewish observance by visiting patients and their families who are receiving medical treatment in the Pittsburgh area.

She has advocated for individuals with disabilities since the Special Needs Task Force, the first organized group within Pittsburgh's Jewish community, met over 30 years ago. "My interest and commitment was cemented after three of our sons were diagnosed with different special needs," Dr. Butler said. "And I'm proud that my uninterrupted activism has led to my being named the incoming Chair of the ARC of Greater Pittsburgh/Achieva.

"We must act with urgency to bring mental illness out of the shadows. In the aftermath of Tree of Life, that need is even greater within the 15217 community," she said. "Within the last few weeks, two teens from Parkland and a father from Sandy Hook committed suicide. Teens, their families, their teachers and all who touch their lives, must learn to recognize red flags and where to turn for help. It's thrilling that there is a coalition of organizations collaborating on this initiative as we strive to build a model that other communities can follow."

Dr. Butler holds three degrees from the University of Pittsburgh: an EdD in Educational Administration & Policy Studies, a Master's in Special Education, and a Master's in the Art of Teaching.

The Jewish Healthcare Foundation launched its Adolescent Behavioral Health Initiative three years ago, in response to evidence that teens in crisis were not getting timely treatment and that families could not navigate an under-resourced mental health system. One in five adolescents have a behavioral health condition. Suicide is now the second-leading killer of teens nationwide; rates for girls are at a 40-year high. In Allegheny County, a third of hospitalized teens had a principal diagnosis of a mental health or substance-use disorder. More than one in three county teens reported intentionally hurting themselves. 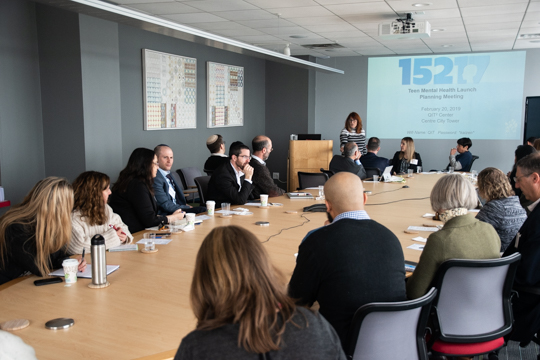 The afternoon planning session organized by JHF for the 15217 Neighborhood Initiative on February 20, involving the Jewish Family and Community Services, the Jewish Community Center, the Jewish Federation of Greater Pittsburgh, Hillel Academy, LEAD (Leading Education and Awareness for Depression) Pittsburgh, Allegheny HealthChoices, and other community partners.

JHF advanced a state policy agenda and helped to build a Youth Advocacy Movement. But progress on realizing an expansion of critical services and better reimbursement for mental health services has been excruciatingly slow. A new direction emerged last year when Jeffrey Finkelstein, CEO of the Jewish Federation of Greater Pittsburgh, pointed Karen Feinstein to the work of the Jewish Federation of Metropolitan Detroit, which has been addressing youth mental needs through its "We Need to Talk" campaign. Leaders from the Detroit program traveled to Pittsburgh to help inform and guide the work here. They spoke at the 15217 planning session organized by JHF on February 20. The session brought together leaders from Jewish social service agencies and administrators from other community partners. All parties offered ideas on how to build an effective grassroots program — and one that includes the voices of the young people involved.

The Detroit program began after a 2016 needs assessment of their Jewish community showed profound distress among teens, with 52 percent reporting anxiety and 42 percent describing depression. The Federation rallied all the regional Jewish agencies and formally launched "We Need to Talk" in May 2018 with a five-year vision. The first year has focused on reducing stigma among youth and training adults in how to address problems. A series of videos featuring teens describing their struggles has encouraged honest conversation about mental illness; 850 educators, youth leaders, clergy and other professionals who work with youth are receiving safeTALK Training, a program that teaches suicide awareness and prevention. Parents are engaged through "FRED Talks" (Focus on Resources, Education and Dialogue) in private homes, led by experts.

The Jewish Healthcare Foundation approved two grants to support the 15217 initiative, as part of the Foundation's response to the October 2018 attack at Tree of Life. A $220,000 allocation was made to support staffing, and a significant designation of funds was set aside to be used for programming for community education, navigation and support, and advocacy.

The agencies collaborating on the 15217 Neighborhood-based Teen Mental Health Initiative decided that it would serve everyone living in Squirrel Hill. While initially focused on the neighborhood — a diverse community that has endured collective trauma — the project will also serve as a model to replicate in other areas of the city.

To find out more about the 15217 Neighborhood-based Teen Mental Health Initiative, or to schedule an interview with Karen Wolk Feinstein, please contact Scotland Huber at 412-594-2553 or huber@jhf.org.

ABOUT THE JEWISH HEALTHCARE FOUNDATION

The Jewish Healthcare Foundation (JHF) is a public charity that offers a unique blend of research, education, grantmaking and program management to advance the quality of clinical care and health of populations, with a focus on improving the quality, efficiency, and safety of health care. JHF and its three supporting organizations — the Pittsburgh Regional Health Initiative (PRHI), Health Careers Futures (HCF), and the Women's Health Activist Movement Global (WHAMglobal) — are located in Pittsburgh, Pennsylvania, and serve a national and global audience. JHF is also a founding member of the Network for Regional Healthcare Improvement (NRHI). For more information, visit www.jhf.org.