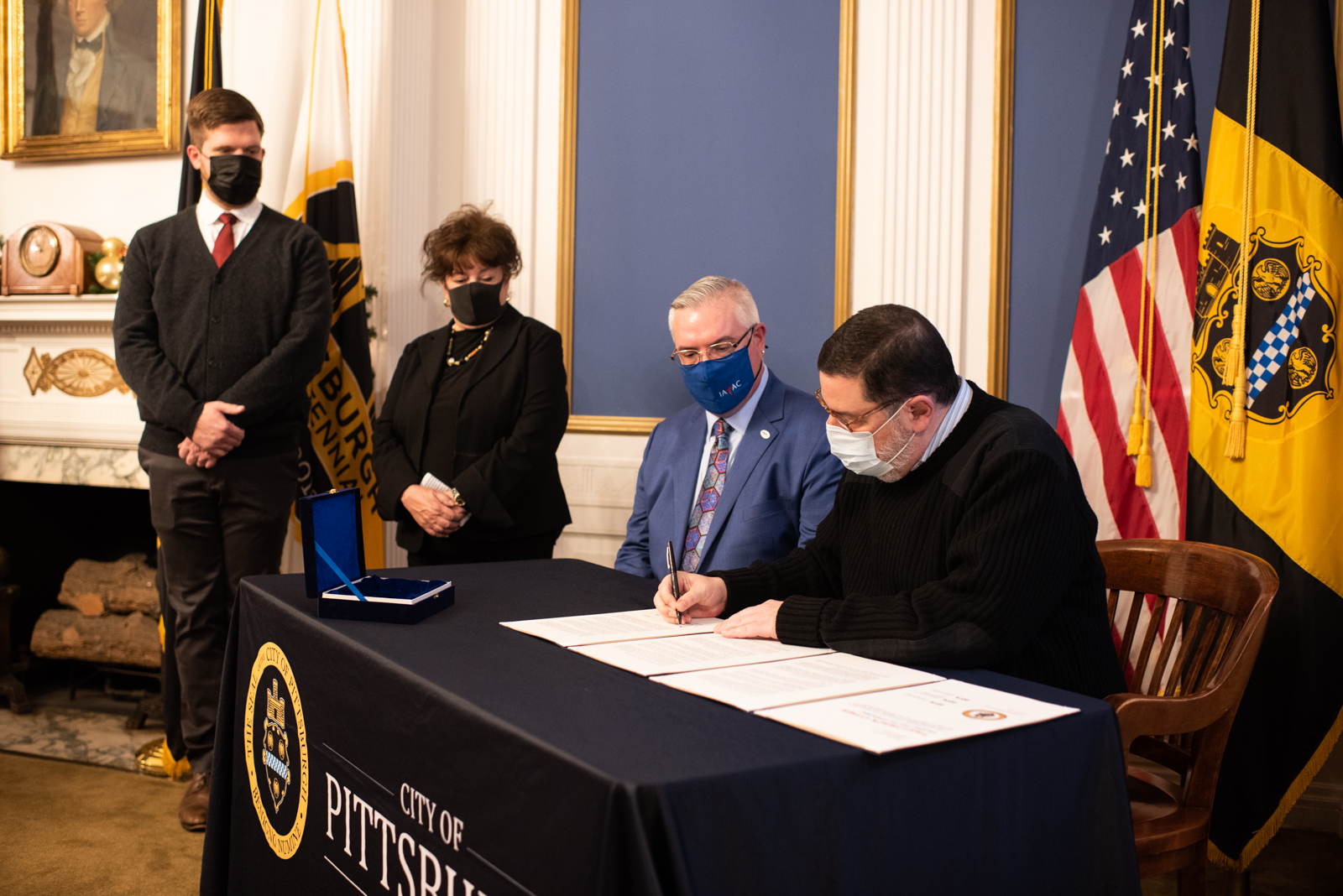 PITTSBURGH, PA (November 30, 2021) – On November 18, Mayor Bill Peduto designated Pittsburgh as a Fast-Track City, making Pittsburgh the latest and only city in Pennsylvania to join a global network committed to ending the HIV epidemic by 2030. Through the Fast-Track City initiative, the City of Pittsburgh has pledged to work towards zero new HIV infections, zero AIDS-related deaths, and zero stigma against people living with HIV. This renewed local commitment to support people living with HIV and other key populations impacted by the epidemic comes just over 40 years after the Centers for Disease Control and Prevention first reported on what would become known as HIV in June of 1981.

In front of key stakeholders, including AIDS Free Pittsburgh (AFP) and representatives from community organizations that provide services to people living with HIV, Mayor Peduto stated that he hopes efforts to end the HIV epidemic would not only be done "through the lens of medicine but the openness of minds and hearts." The Mayor also acknowledged the significance of the Fast-Track signing falling just weeks before World AIDS Day (December 1), a day of remembrance and activism.

Since 2015, AFP has played a crucial role in local efforts to end the HIV epidemic in Allegheny County through working to normalize HIV testing, increasing access to pre-exposure prophylaxis (PrEP), a pill that can reduce a person's chances of getting HIV, and improving linkage to care for those newly diagnosed with HIV. Employing a collective impact model, AFP functions as a collaborative public health initiative comprised of government agencies, healthcare institutions, and community-based organizations.

AFP's efforts have proven successful, with a 43% reduction in new HIV cases in Allegheny County between 2015 and 2020. In 2020, there were 2,982 people living with HIV and 79 new cases of HIV in the county, according to the Pennsylvania Department of Health (2020 Annual HIV Surveillance Summary Report).

"While our local HIV infections have decreased in the last five years, there are still alarming disparities among young Black men who have sex with men…AFP has spent the past few years with community members and organizations to bring awareness to these disparities and work collaboratively to eliminate stigma and systemic racism so all citizens of Allegheny County can access the HIV-related services they need with equal equity, dignity, and respect," said Richard Smith, chief relationship officer at the Jewish Healthcare Foundation and chair of AFP.

AFP recently revamped their website (aidsfreepittsburgh.org) with information on HIV testing and PrEP as well as resources for providers. The website provides an interactive map that allows individuals to easily identify healthcare providers and community organizations throughout Southwestern Pennsylvania who provide HIV testing, prevention, treatment, and supportive services closest to them based on zip code.

In honor of World AIDS Day, agencies across Pittsburgh and Allegheny County are hosting events that include free HIV testing, COVID-19 vaccinations, information on housing resources, and virtual panel discussions about HIV. Refer to the flyer below for a full list of upcoming events.

Though the tools exist to achieve an AIDS Free County, progress is still needed to reduce health disparities, increase testing, employ prevention strategies, and ensure rapid linkage to care. AFP continues to work alongside government and community partners to end the HIV epidemic by 2030 and ensure a sustainable and equitable impact.

AIDS Free Pittsburgh (AFP) is a public health movement to end the AIDS epidemic in Allegheny County by 2030. AIDS Free Pittsburgh is a collaborative initiative comprised of government agencies, healthcare institutions, and community-based organizations that strive to support and improve the care of people living with HIV/AIDS and other key populations. AIDS Free Pittsburgh does not provide services directly, but rather works to raise awareness and build collaboration among community stakeholders. The AIDS Free Pittsburgh initiative was officially launched on December 1, 2015 following similar efforts in San Francisco, New York State and Washington State. Allegheny County is the second county in the United States to take on this challenge. For more information, visit aidsfreepittsburgh.org.

About the Jewish Healthcare Foundation