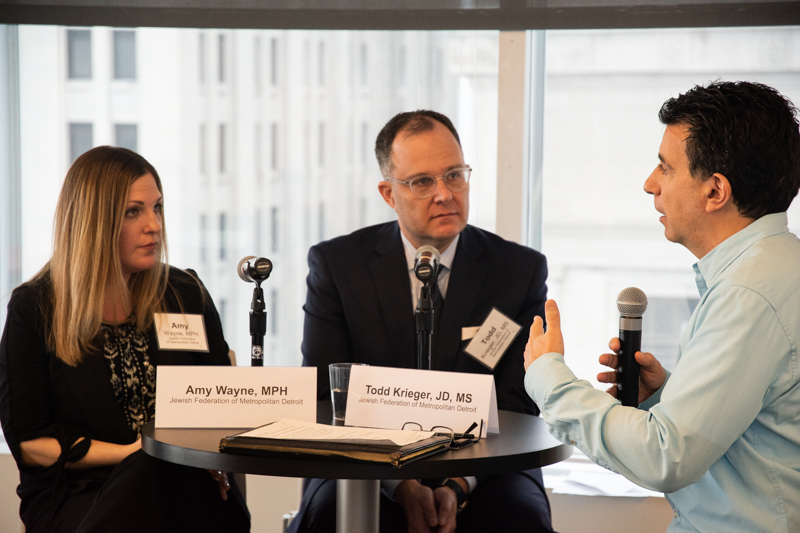 JHF Board Secretary Danny Rosen, PhD, MSW (right), interviews the two guests from the Jewish Federation of Metropolitan Detroit: Todd Krieger, JD, MS (center), senior director for planning and agency relations; & Amy Wayne, MPH (left), youth mental health coordinator.
A breakfast at Ritter's led to a breakthrough. One morning last summer at the Bloomfield diner, Jeffrey Finkelstein, CEO of the Jewish Federation of Greater Pittsburgh, was listening to JHF President and CEO Karen Wolk Feinstein describe the Foundation's ongoing efforts in adolescent behavioral health. She was frustrated that, despite three years of JHF policy and advocacy work, change was agonizingly slow — and the needs were immediate. "You might," said Mr. Finkelstein, "want to talk to our friends in Detroit." The Jewish Federation of Metropolitan Detroit had recently rolled out "We Need to Talk," a community-wide initiative to address the crisis of youth mental illness head-on.

Connecting to Detroit would present a new perspective on what can be achieved in a short period of time. 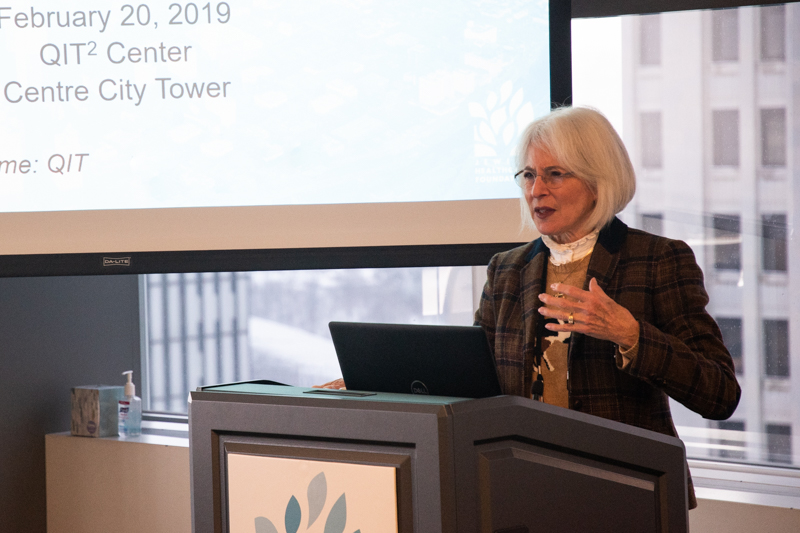 Fast-forward to February 20. JHF held a day-long planning session for 15217 Pittsburgh, a neighborhood-based teen mental health initiative. Two leaders of the Detroit program — Todd Krieger, JD, MS, senior director for planning and agency relations of the Jewish Federation of Metropolitan Detroit; and Amy Wayne, MPH, youth mental health coordinator for the Federation — spent the morning describing their efforts and methods to an audience of more than 50. In the afternoon, planning commenced for 15217 Pittsburgh, involving the Jewish Family and Community Services, the Jewish Community Center, the Jewish Federation of Greater Pittsburgh, Hillel Academy, LEAD (Leading Education and Awareness for Depression) Pittsburgh, Allegheny HealthChoices, and other community partners.

​As in Detroit, 15217 Pittsburgh (named for the zip code of Squirrel Hill) will build on existing partnerships, reflect the cultural experiences of the community it serves, and be designed for replication in other neighborhoods. While the Detroit program works in the Jewish community of its sprawling metro area, Pittsburgh's is concentrating on Squirrel Hill — a neighborhood with a historically strong Jewish presence, but also Pittsburgh's most diverse.

JHF planning for a next phase of the youth mental health initiative was underway before the October 27 attack at the Tree of Life Synagogue. Dr. Feinstein knew that the program would now be "addressing a community in trauma," and that mental health needs would grow ever more acute. "Building a Community Safety Net for Teen Mental Health from the Bottom Up" was the overarching theme of the February 20 event. 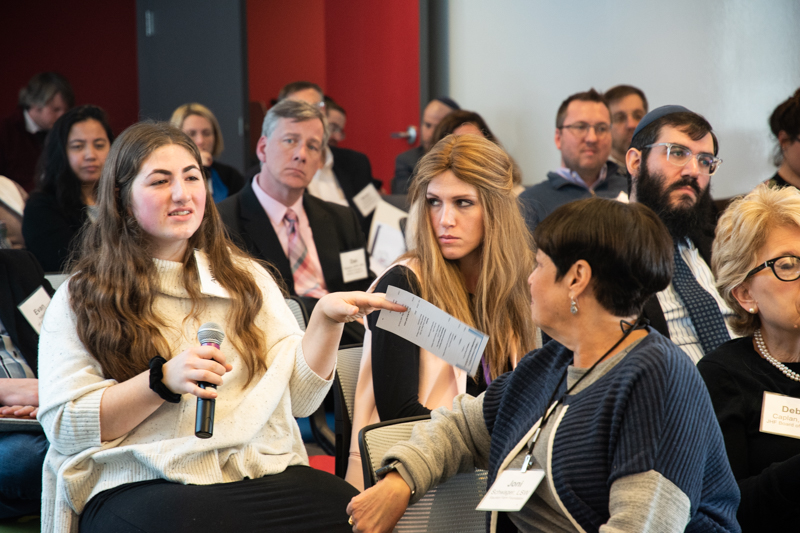 Ayala Rosenthal, a senior at Yeshiva Girls School who has become a mental health advocate, represented the youth voice at the event. While part of her efforts are devoted to her Orthodox community, she is working for all teenagers. This past November, with JHF support, Ayala organized a suicide prevention training for more than 30 local students as well as a teen mental health panel for more than 100. "The teenagers are active," said Dr. Feinstein, acknowledging Ayala in the audience, "and they are expecting us to be active, too. They want to be advocates for themselves, and we should be running to keep up with them."

The Detroit program, said Mr. Krieger, is based on the belief that "we can't change the system, but we can support youth" in a series of smaller and helpful ways. If at first "you try to take on the system, you are setting yourself up for failure." He acknowledged a paradox of the era: the many digital tools and networks that are supposed to increase communication and connection are, in practice, making many young people more lonely and isolated. Moreover, "there is a major need for parent education," he said. "They need to be teaching resiliency," rather than smoothing out life's difficulties for their kids — and simultaneously applying undue pressure to get into the "right" college. 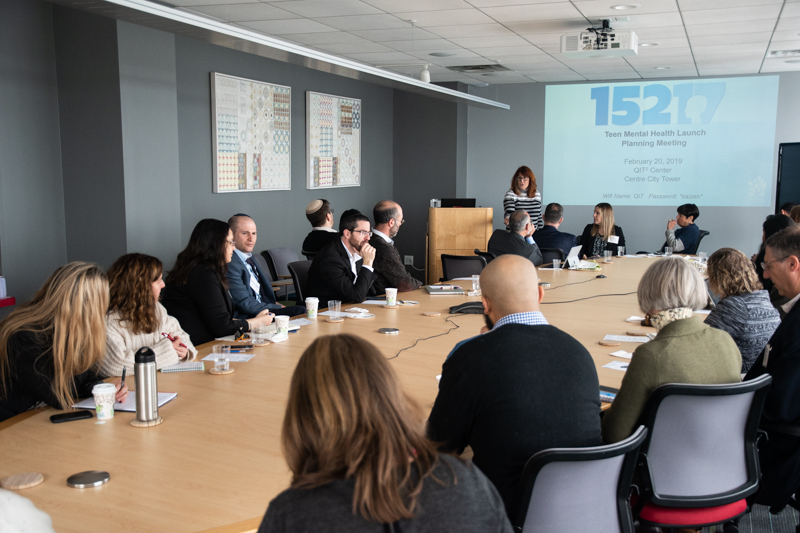 The afternoon planning session for 15217 Pittsburgh.

The Jewish Federation of Metropolitan Detroit began by calling every Jewish agency in the region together. "We are the convener," said Mr. Krieger. "We can get everyone at the table and talking." The program that emerged is based on three pillars: 1) Training (suicide awareness and prevention for all people engaging with kids 10 and older), 2) Education/Awareness (programs and activities that destigmatize mental health); and 3) Interventional Supports (additional mental health professionals spread throughout the community).

Mr. Krieger said the most successful part of "We Need to Talk" has been the series of short videos, available on www.jhelpdetroit.org/weneedtotalk. They range from mental health experts offering advice to dramatic first-person stories from teenagers recounting their own struggles. Some have received more than 20,000 views.

In closing the day, Dr. Feinstein recognized the work of all partners to date. "We all acknowledge that we have a problem. We need to take time to talk about solutions, and we need to do better," she said. "Our commitment to all of you is that we will come up with an action plan."