A Tribute to Rob Restuccia, an Ally in Healthcare Reform 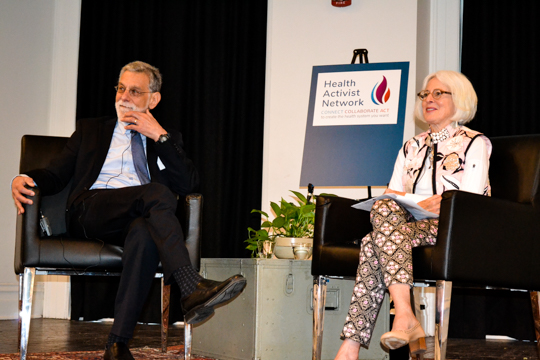 The Foundation mourns the loss of Rob Restuccia, a longtime friend and ally who was a national leader in healthcare reform. Restuccia died March 3 at the age of 69 from pancreatic cancer.

Restuccia created a grassroots movement in Massachusetts in 1989, Health Care For All, where he led successful campaigns to expand health coverage. In 2000, he became executive director of Community Catalyst, guiding efforts to expand children's health insurance and protect consumers' rights. His work affected health reform at the federal level and in over 40 states.

"We've lost a really fine activist and catalyst," said JHF President Karen Wolk Feinstein, who met Restuccia 45 years ago while living in Boston. "Rob's contribution to equity in health care is unsurpassed. He truly 'lived to serve others.' "

His last visit to JHF was in 2017, launching the Health Activist Network's Speakers Series. He told the young healthcare professionals that his path to activism began as an orderly at a public hospital in California that was starved for resources. "I saw the contradiction between what this country aspires to be, and what was happening to people," he said. "I saw the disparities in health care, and knew that I had to translate it into action."