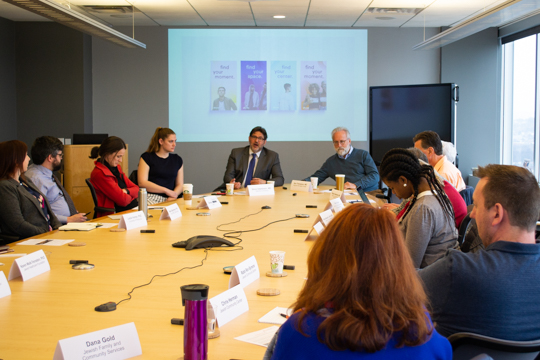 Steven Adelsheim, MD (at center, in tie) and his daughter Zoe (beside him, to left) describe their work in youth mental health. Ken Thompson, MD (beside Dr. Adelsheim, in blue), a psychiatrist who serves at the Squirrel Hill Health Center, helped to arrange the event.

JHF hosted a presentation on March 22 about youth mental health work in Northern California, inspired by approaches in Australia. Steven Adelsheim, MD, director of the Stanford Center for Youth Mental Health and Wellbeing in the Department of Psychiatry, spoke alongside his daughter Zoe, a senior at Palo Alto's Gunn High School and a youth mental health advocate. (It was a homecoming for Dr. Adelsheim, a Pittsburgh native whose late mother, Marcia, was a geriatric social worker at Jewish Family and Children's Service for more than 20 years.)

Australia's program to address youth mental health, called Headspace, provides services in places "that don't look like your typical clinic," said Dr. Adelsheim, and with outreach campaigns that encourage kids to check it out, even if they don't have an acute emotional problem. Headspace, and similar spaces in Canada, have inspired Zoe and other youth mental health advocates in her community to create Allcove, which will open later in 2019. Its philosophy: "Everything about Allcove was designed with, by, and for young people." 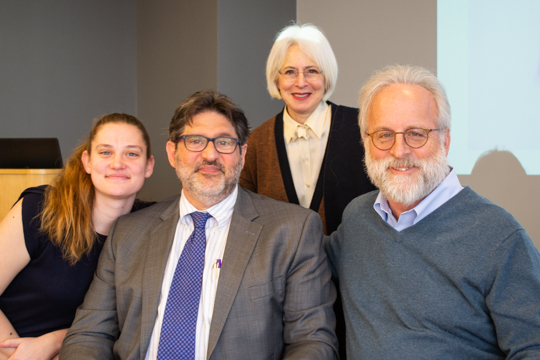 ​Peter Bachman, PhD, an assistant professor of psychiatry at the University of Pittsburgh, applauded the Allcove project: "It is not fiddling around edges, it is rethinking." Dr. Bachman is director of The Hope Team, providing clinical services to youth at risk for mental illness. Ken Thompson, MD, a psychiatrist who serves at the Squirrel Hill Health Center, called the approach "a drop-in center that youth control, and has professionals who have rep for being cool. You would be willing to hang out there."